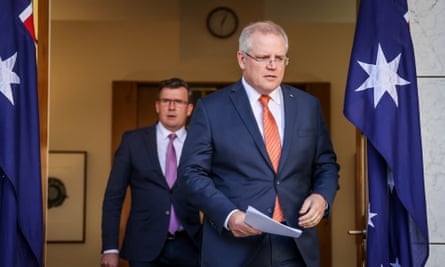 The Morrison Government continues to display such levels of dysfunction as to be almost comical. That would be true if it was not so tragic for Australia. Let us count some of the ways this Government is bungling its way forward, during a global pandemic.

It has announced, through the stand-in Minister for Immigration, that it intends to redesign the test for Australian citizenship. From November 15, there will be new test questions on “Australian values”. This may be just another announcement of an intention, but it obviously exercised the mind of the responsible person.

Alan Tudge is the stand-in Minister, because the actual Minister, David Coleman, has been on personal leave since December 13, 2019. That is over nine months now, which is a long time to stand aside, without being replaced. It is said that he still represents the people of Banks. So he has been given leave of absence for a part of his job, but not all of it. This is a novel idea, which the Canberra Press Gallery has not seen fit to question.

Anyway, in the absence of the Minister, and considering the gravity of the situation, they brought in the guy on the bench. He has a somewhat sketchy record in management, but you go with what you have, when you’re short of staff.

What will the Australian Values be?

Tudge says this test will require potential citizens to understand Australian values like freedom of speech, mutual respect, equality of opportunity, the importance of democracy and the rule of law. They must answer these questions correctly, so clearly values are very important.

Please remember that the person applying the test for Australian values, is the very same individual responsible for the Robodebt fiasco, the introduction of the cashless welfare card, the perilous folly of criticising the Victorian Appeals Court, and last but not least, he has recently been accused of ‘criminal conduct’, in which he kept a detainee locked up, in defiance of a judicial order to release him.

So that would appear to be a clear-cut case of a misuse of power. He kept a detainee in detention, illegally, for five days. He apparently did not agree with the ruling by the court. The next part is priceless, however.

The senior Law Officer in the Parliament, Attorney General Christian Porter, when asked whether Mr Tudge should resign, defended his actions thus: “it’s not the first time that in the robust environment of the law surrounding visa approvals, that there’s been strong words said about what is in effect government undertaking its duties through the minister”.

So if we unpack that, it is a commonplace for the Government to break the law, as the act of depriving the man of his liberty unlawfully, was merely “government undertaking its duties through the minister”.

To continue the theme of ‘old Hallelujah Morrison’ and his enthusiastic band of libertarians, Mr Porter has presided over an era where secret trials are conducted, with no public oversight, of not only a whistle-blower who told the truth, but his lawyer, for defending him. Has Mr Porter been following the career of William Barr, Attorney-General of choice for Donald Trump?

To return to the matter of the Centrelink scandals, Mr Tudge has been accused of knowing that Robodebt was unlawful as far back as 2017, and yet he persisted in its use, and the harm it caused. This tale is almost biblical in its outcome. They ruined people’s lives, to recoup a piddling sum of cash, which they will have to repay in full, and then pay much more, in damages. Maximum harm to so-called clients, at a huge cost. That is what happens when you are consumed by hubris.

Alan Tudge is also the Minister who introduced the cashless welfare card. The cashless welfare card is one which places 80% of a person’s income into a card, which prohibits the purchase of alcohol, gambling, and the withdrawal of cash. It is an affront to any adult, and the Government continues to show its contempt for the unemployed. I blame that attitude on the ‘prosperity gospel’, which is a self-serving belief system for the deluded, who confuse luck and ruthless ambition with God’s rewards.

Minister Tudge designed the card alongside Andrew Forrest, a well known billionaire, ‘familiar’ with being dehumanised because of poverty. Mr Forrest wanted it made mandatory for unemployed people, carers, people with disabilities and single parents. That would be the hugely experienced social worker Andrew Forrest? Not even Tudge thought that would fly.

Fun fact: Mr Forrest has been accused of avoiding paying company tax, having revealed in 2011 that Fortescue had never paid company tax. He was also unelected, and yet he was on the panel to advise the Federal Government on welfare matters. One can only hope he was not paid for his time.

Anyway, back to the citizenship test. We can only hope that the people marking the papers do not take too hard a line. We need an injection of brains in this great country of ours, because it is clear that those who have risen to the top are not up to it. And isn’t it good that in the midst of a global pandemic, the Government and its fearless leader are onto the important issues.