Most Victorians are thrilled by the results obtained by lockdown, which was imposed by Daniel Andrews. You might call our original assent grudging, but it gradually morphed into gratitude, as long as the Trump-lite knuckle draggers in the Federal Government allowed us to deal with the second wave, our own way – a hard lockdown. Victoria is alone in suffering through a second wave, so our experience and our success are worth celebrating.

Since then the second wave has been crushed in Victoria, with new cases in single digits almost every day, and a decreasing death rate. Take a good hard look at Boris Johnson’s pathetic leadership, and the deadly cost of having a neoliberal idiot in charge.

We were on similar case numbers on July 30, and because of the lockdown we are almost 17,000 cases better off today. At a 1% death rate from overall infections, that looks like 170 deaths from one day’s cases.

So this is where you have to wonder whether these liberals and the other right wing folk have been perhaps giving the Scotch bottle a bit of a nudge between meals. Because they seem not to understand the situation, or perhaps they really believe money is more important than human life.

Not everyone has been helpful

Jeff (I feel so useless, and foolish) Kennett is whinging about Grand Final celebrations. Two points: your team is not even in the big dance, and secondly, my team (the Tigers) is, and I am happy enough to miss out on a party in the short term, as long as my family and I are safe from the pandemic in the long term.

That is called playing the odds, and planning for the future. The opposite of your government, which sold half the state’s schools to real estate developers back in the ’90s. Of course we had to re-build them later, but Jeff had already moved on.

What about Josh (the boy-treasurer) Frydenburg? I believe that he has found his people, the hard-right fat-cat warriors, who unashamedly put the nation’s economy before public health, but they are too dishonest to say so. He is either particularly insensitive, or just stupid, to rabbit on about mental health in such dangerous times.

His sanctimonious words will come back to haunt him, as the Jobseeker cliff looms. That little gift to the Australian people will cause a giant spike in mental health cases, when over 6 million people are thrown into poverty, again. Poverty, with hunger and homelessness thrown in.

Morrison was always keen to not be seen putting economic concerns before the public health dilemma. That kept him relatively quiet for a few months, but his tiny neoliberal soul would not let him rest. When you are steeped in market-based ideology, it is difficult to let go. And so he has unleashed his minions.

And what a group they are. Frydenburg, Hunt (I am the Health Minister), Tudge (locks up detainees illegally), Kennett (desperately seeking relevance), Dutton (not prejudiced, he hates all Laborites, Victorians and Queenslanders) Tim Wilson (please take a photo of me) with the evil Scotty from Marketing, still trying to put daylight between himself and his Victorian attack dogs.

Steady as she goes

Many of us have been separated from family, limited in our social lives, many are in fear for their finances; but most of us are alive, and the fear of contagion is receding. For a reason that I cannot fathom, Scott Morrison has decided that he is willing to continually wage war on Daniel Andrews, pressuring him to re-open the state and to remove restrictions.

Victoria might be considered a lost cause to the Coalition, but we all have memories. We can still punish you at the next election, by removing the remaining duds from your team. And although Dan has had some uncertain moments, I still stand with him, and the rest of Victoria. 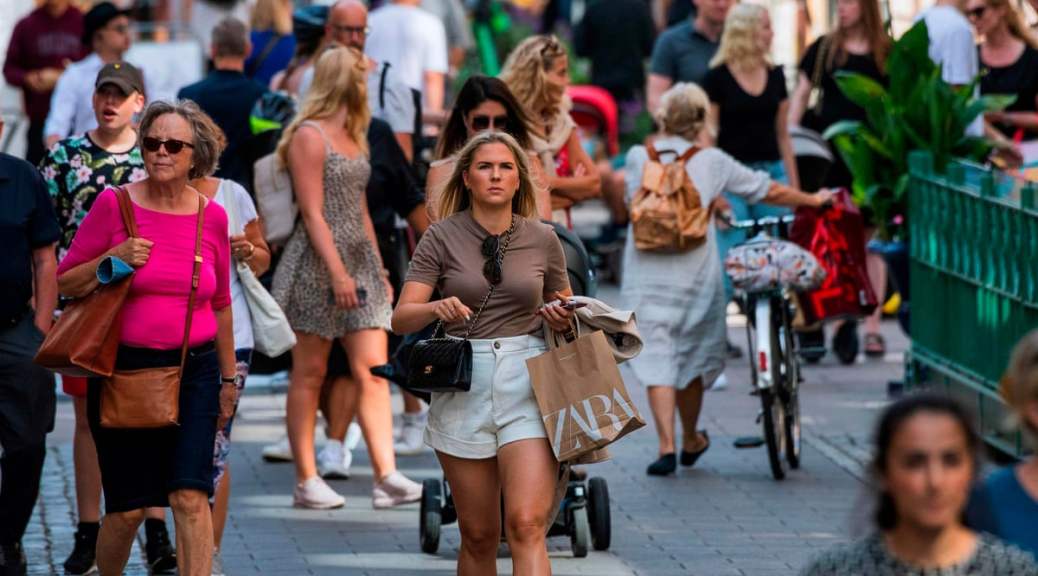 Considering how almost universally admired the Nordic countries are, Sweden has broken ranks with its neighbours, in the manner in which it has responded to the pandemic. The country has dealt with the Covid-19 virus very badly, and the proof that this is so, is its current death rate. It is close to the world’s worst.

According to the World Health Organisation, “a well-functioning healthcare system requires a steady financing mechanism, a properly-trained and adequately-paid workforce, well-maintained facilities, and access to reliable information to base decisions on.” Based on those criteria, Sweden has a modern, well-equipped, and funded, health system. It is at least the equal of Australia’s.

How does Sweden’s approach differ from ours?

It is very simple. Sweden did not lock-down. It relied on the opinion of one health bureaucrat, state epidemiologist Anders Tegnell, of the National Institute of Public Health, to formulate its response. It also relied on the innate good sense of its citizens, to voluntarily apply social distancing. Initially Mr Tegnall believed that it would not spread from China. Later on, he believed that contact tracing of individual cases coming from abroad, would be an effective method of stopping the contagion.

The Government, led by Prime Minister Stefan Löfven, continued to follow his advice; it was more comfortable in those early days, and chose not to legislate for social distancing. Later, at the end of March, as the pandemic claimed more lives, it limited gatherings, from 500 down to 50, and then legislated penalties for non-compliance. It also shut down visits to aged care facilities, because there were infections at close to half of them.

It looks very like Boris Johnson’s early mis-steps in the U.K., except that they corrected their direction even more belatedly than the British. One crucial difference is that they do not seem shy about mentioning ‘herd immunity’. The Swedish Government is now claiming that it is approaching that point. At what cost? Well, that would be 1540 deaths, and counting. The death rate per million citizens is 151. Australia’s is 3.

Those bearing the burden for that herd immunity are the elderly. Swedes are at last awake to this fact, and they are not happy. The Swedish Government has listened, and is desperately playing catch-up.

I mention Sweden because there is a rising impatience with the lock-down, here. We are all tired of isolation, and grumpy that we are not seeing our families and friends, or football matches even. Many business leaders are calling for selective re-opening of sectors of the economy. Many believe that we have over-reacted to the Covid-19 pandemic, and I fear that their voices will become louder. I fear that our politicians will listen to those voices, and lose their resolve.

It is hard to trust politicians in this country. They have failed us so spectacularly over the last decade or so, that it is difficult to believe that they have our best interests in mind. Already the Murdoch press is railing at the shut-down, and the spectre of government debt is looming. Business leaders are warning of financial Armageddon, the IPA is warning that we have lost our basic freedoms, and the forces of the right are gathering steam.

I want the Government to stay the course, because this virus is so effective, and so infectious, and we are so close to victory. The Swedish example is proof that social distancing is the best way to defeat the virus, and that allowing life to go on as if nothing is happening is totally disastrous. Not to mention cavalier, in treating the lives of ANY citizens as expendable.

Scott Morrison has been something of a revelation lately. But there are elements within his own party, and within the loud right, who would undo the good work done so far. We need to continue our locked down lives, at least until we have evidence that we have neutralised the virus. Black humour in times of crisis is fine, but the U.S. is losing 3000 lives a day; on Sweden’s worst day they lost 170 out of a small population. These are not just numbers, but real people, lost forever to their families, and their communities.

This is too serious to leave to the cynics and the profit takers. The fear of a second wave is no laughing matter, as Singapore can attest; and we have barely felt the first wave. I believe in our own scientists, and our medical people, and I am prepared to back our current strategy. Our lives depend on it.

The death rate is 156.45 per million compared to 62.84 in Denmark, 28.41 in Norway and 17.69 in Finland, all of which have much more severe lockdowns. Its death toll is roughly three times the combined total of its Scandinavian neighbours. Australia’s death rate remains at about 3.

We have to stay the course!