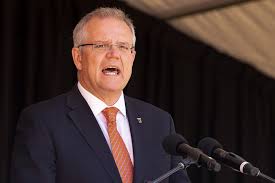 Did Scott Morrison Need to Change His Ways?

Has our Prime Minister improved in his demeanour since the bushfire crisis? Has he reflected on the community’s assessment of his character, and decided that he needs a make-over, or a session of barnacle removing, a la Tony Abbott? Is it possible for him to change the dismissive, arrogant, my way or the highway approach, especially towards journalists, who are only asking him questions because we want them to.

His first efforts were hopeless.

Ever since he returned from his ill-conceived holiday in Hawaii, he has been traversing some difficult ground. Generally and sincerely disliked on his return, his first steps into the unknown territory of regret were badly managed, and to many his words were betrayed by his seemingly innate contempt for open conversations, and an inability to accept criticism.

His apology for the holiday’s destination, and its timing, was ‘sorry, not sorry’ style, similar in tone to how a famous sportsperson might apologise: ‘if anyone was offended, I apologise, but it is really not much to be offended by, etcetera’. Most people see through such an apology. Clearly he was advised by a PR person, with no help from his empathy adviser.

He later likened himself to a plumber, torn between a commitment to his business, and his promises to his family, or as he stresses, “his kids”. Except that he went on holiday, overseas, while his home town (Sydney) was potentially burning, and definitely choking on toxic smoke. Not really a leaking tap situation.

As I have stated elsewhere we don’t want our leaders as stand-in father figures, we want them to present themselves when necessary, and to share our difficult times, with grace and fortitude, and empathy. If they really care they should hurt along with the rest of us, and we are all able to recognise when someone is sharing our pain.

Morrison continued his rehabilitation efforts steadily. He seemed to jettison his stance that he would give Commonwealth help only when asked, and came up with the offer of $2 billion dollars to help with the recovery, and rebuilding the country. But every time he showed himself, it became a recitation of how generous he was being, and how he was seemingly giving up his dream of a budget surplus, for us.

He was also at pains to establish in the public mind that the Commonwealth had been assisting in the bushfire crisis from early on in the piece, rather than as a sop to the country when most of the damage had already been done. Too little, too late was the community’s feeling.

His message was further undercut by his insistence that fighting bush-fires is a state responsibility, and the Feds only act when asked, and they hadn’t been asked. Really? That is hard to believe. This was not the first national emergency Australia has faced, and the Army has been used before.

The eventual arrival of the naval ships was very welcome, but, again, every time he appeared on television, or radio he made it all sound as if he was speaking at a political rally. His army, his navy, and he didn’t even bother to warn the firefighters that much-needed help was on the way.

After the deployment his office actually spruiked the use of the Defence Force as an act of grace, provided by the Liberal Party, on Facebook. There was even a “donate” button, until someone, maybe the empathy adviser, had it removed. Even as I read that sentence I am amazed all over again, that we can take Scotty out of Marketing, but we struggle to take the Marketing out of Scotty.

Was Climate Change a factor?

As the country burned, the issue of climate change was the elephant in the room. Morrison appeared, momentarily, to budge on it, acknowledging the science, and promising that the Government was “evolving” its position. This proved to be a false dawn, however, because he began repeating his deceitful mantra that we would “meet and beat our Paris targets at a canter.” A deliberate nonsense, of course, achieved by using a dodgy accounting trick. His ability to repeat these claims without batting an eyelid is testament to his ‘superb indifference’ to the community.

Look over there, a unicorn!

At least he had moved on from saying that during the fires was not the right time to discuss the likely causes, but he did introduce a couple of diversions, picked up directly from the Murdoch press. These were that arsonists were the major cause, or that the lack of fuel reduction burning was to blame. Obviously they were factors, but grossly overstated, and in the case of arsonism, he or his minions deliberately used misleading Police statistics.

This muddied the waters, and was an attempt to move attention away from the obvious effects of the hottest year on record in Australia, and a near record dry spell. The predictions that climate change would increase the number of extremely hot days, and even the likelihood of prolonged low humidity were proved right. Helpfully, Craig Kelly continued his ridiculous tilting at climate change windmills (?), until Morrison had to gag him.

While this effort at re-branding the Prime Minister was proceeding, Morrison was busy backgrounding journalists by denigrating the NSW Premier and her efforts during the darkest days, including stating that she had refused an offer of assistance from the Commonwealth. She vehemently denied the fact, so not much consideration for Liberal Party solidarity. When times are tough, every man for himself!

Recently he has been pushing the adaptation and resilience theme, which is very sensible, but another diversion away from the main game – the climate is getting hotter, and the bush-fire season is only going to get longer, year on year if we do nothing about the climate. Let us not forget that the season for bushfires has considerable time to run.

So, any change in our Prime Minister?

The latest controversy, over using public funds to shore up his electoral chances, was dealt with at the National Press Club, where he baldly stated that if people were disappointed at missing out on the Pork Barrel Express, he would look at re-opening the scheme, so that even more money from our hard earned taxes could be directed to sports clubs. When asked whether it was proper for the Minister (Bridget McKenzie) to over-ride the relevant NGO and its experts in apportioning grants, he stated that Ministers knew more than the career public servants tasked with the job anyway, so no problem there.

In breaking news he has attempted to excuse the inexcusable, by accepting McKenzie’s resignation for breaching ministerial standards, over a petty $36,000; whatever happened to the $100,000,000? Oh I am sorry, he has offered to open the wallet for ALL the disappointed clubs which missed out. Wow, our money, and he is prepared to be so generous with it! He really does not get it. We are not all stupid, and incumbency is not a licence to steal.

This is staggeringly inept from a politician. Even he knows how lowly we rate politicians, in all fields, but especially when it comes to using taxpayers’ money for personal political gain. This man continues to be the arrogant wowser we all thought he was, without a shred of self-awareness.

So in answer to my question, no. He has very definitely not had an epiphany on this road to Damascus.