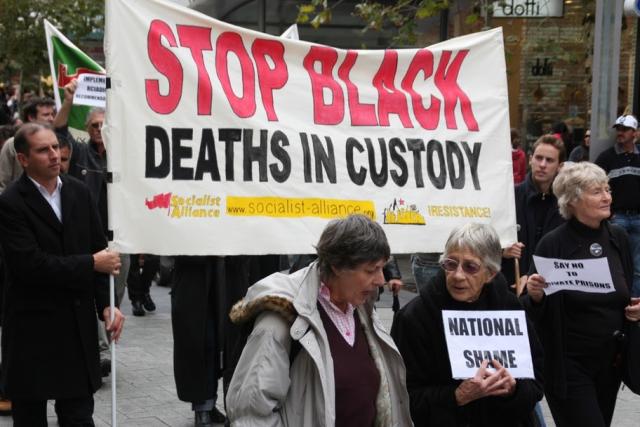 In 2015 David Dungay Jnr died at Long Bay jail. He was 26 years old, he was indigenous, and he suffered from significant health issues. These included childhood-onset Type 1 Diabetes.

His death happened as a consequence of his being moved from one cell to another. He was being moved because Mr Dungay’s blood sugar had already been tested four times that day, and found to be elevated. The ‘new’ cell was equipped with CCTV, presumably so that his blood sugar and his physical well-being could be monitored remotely.

What caused his death?

Mr Dungay was eating a packet of biscuits, and the officers demanded that he stop eating before they moved him. He was given two minutes to comply. When he refused to stop eating the biscuits, the guards called on the Immediate Action Team (IAT) for assistance. The IAT is used as a ‘specialist’ team for moving inmates, a de facto ‘riot squad’.

On their arrival, they rushed into his cell, grabbed him and shoved him face-down on to his mattress. They then cuffed him, with his hands behind his back. He was picked up, moved to another cell, and held face-down again. A nurse administered a fast acting sedative into his buttock as he was being restrained, by up to six guards. In scenes reminiscent of George Floyd’s recent death, he continued to scream that he could not breathe. One of the officers responded to his cries several times, that if he could talk, he could breathe. Soon after he was administered the sedative, he died.

As already stated, the new cell was an observation cell, one equipped with video surveillance. As he was being moved, the CCTV showed that he was splitting blood. His mother has since noted that his nose was broken, the skin split, and his face was “caved in”. There has been no finding as to how the injuries occurred. They must have occurred between the arrival of the IAT and his being moved along the corridor. There was no other window of opportunity for his injuries to be inflicted.

What was the outcome of the investigation?

The finding of the Coroner’s Court was that he died from inadequate medical care. The detective tasked with investigating the death did not enter the cell for two hours after Mr Dungay’s death, and all the material evidence had been removed in the meantime. Has that detective been re-trained?

No matter where you stand, something is not right about this whole case. A 26 year old man died because he was eating biscuits. The actions of the staff, both the guards and the nursing staff, were not dictated by a desire to keep him safe. They wanted him to stop eating biscuits, because he was disobeying them. They appeared to engage in a ‘shock and awe’ type moment to intimidate him. Their explanation that they were trying to help him is ridiculous. An actual case of killing someone with kindness it was not.

No charges have been laid yet. The NSW Corrections commissioner, Peter Severin, issued an apology to the family, acknowledging “organisational failures”. The family say they will seek prosecution of the guards. Mr Dungay continues to be mourned by his family, and the rest of the Australian community doesn’t even blink. It is a ridiculous sham to see and hear the Australian community dragging itself up that tiny hillock, where the High Moral Ground is to be found, and judging Americans for the death of George Floyd.

One argument sometimes raised is that they were dangerous men and women, and police and prison guards have a right to be safe. Closer analysis shows that many are women, or children, or on remand, or being pursued. Very few police, if any, were in fear for their lives. Aboriginal deaths in custody are seen in this country as being somehow normal, even expected.

From those 432 deaths, over 29 years, not one of their custodians has been convicted of a crime relating to the deaths. In the case of Mr Dungay the Coroner declined to refer any of the guards for prosecution, but he did recommend more training for guards and nurses. A lot of use that will be.